Additionally, to amplifying our AC signal using an op amp, we are now going to use a push-pull stage to further increase the output power.

In the last parts of this project, we already implemented loads of measures to amplify our generated AC signal. However, even though we used an op amp to amplify both current and voltage of our signal, the output power of our circuit is still very limited. This is mainly because the LM358 is not able to handle higher currents on its own. To solve this issue we are going to use an external transistor push-pull stage.

A push-pull stage is a common solution for amplifying the output current of an op amp. The truth is, the LM358 already contains such a push-pull stage as output stage. It's just not powerful enough for us. If we use an external push-pull stage, we can choose the transistors according to the desired output power. For the purpose of this project, I chose to use the BC337 (NPN) and BC327 (PNP) transistors. These transistors are designed for amplifier circuits and support a continuous current of 800 mA and can dissipate 625 mW of heat without external cooling. Of course there exist more powerful transistors, but these should do the job in our case. Feel free to replace them with more powerful matched pair of transistors, if you need a higher output power.

As both transistors require a base-emitter voltage of roughly 0.7 V to conduct, the output range of the op amp needs to be bigger than the peak-to-peak voltage of the amplified signal. We are going to reuse the code from the last part of this project. The minimum voltage in the generated sine wave is thus 1.5 V and the maximum voltage is 8.5 V. The maximum voltage of 8.5 V should not be an issue if we use a 12 V supply voltage. But what about the lower limit? Luckily, the 1.5 V are also within our limits. The minimum possible voltage is 1.4 V, as we need 0.7 V to turn on the external PNP transistor and another 0.7 V to turn on the transistor inside the LM358. The good news is, we don't need to adjust the code and can start right away with building the new amplifier circuit.

For our AC source we need two amplification circuits with push-pull stage. The first one is for amplifying the sine wave signal and the second one for the artificial ground reference. The load is then connected in between these two amplifier circuits, as shown in the circuit diagram below:

Once again, we can use the MCP4725 or the PWM DAC circuit to generate the sine wave signal. Choose your favorite option and build up the circuit as following:

The complete circuit is getting more and more complicated, however, the additional push-pull stage is worth it. It allows us to significantly increase the output power and gives us the option to increase it even more by using more powerful transistors. As you can see I replaced the 220 Ω load resistor with a 51 Ω resistor. Thanks, to the push-pull stage the output signal remains stable.

Let's have a look at the result. As said before, the output signal remains stable even for bigger loads. We still get a clean sine wave signal with an amplitude of 3.5 V. 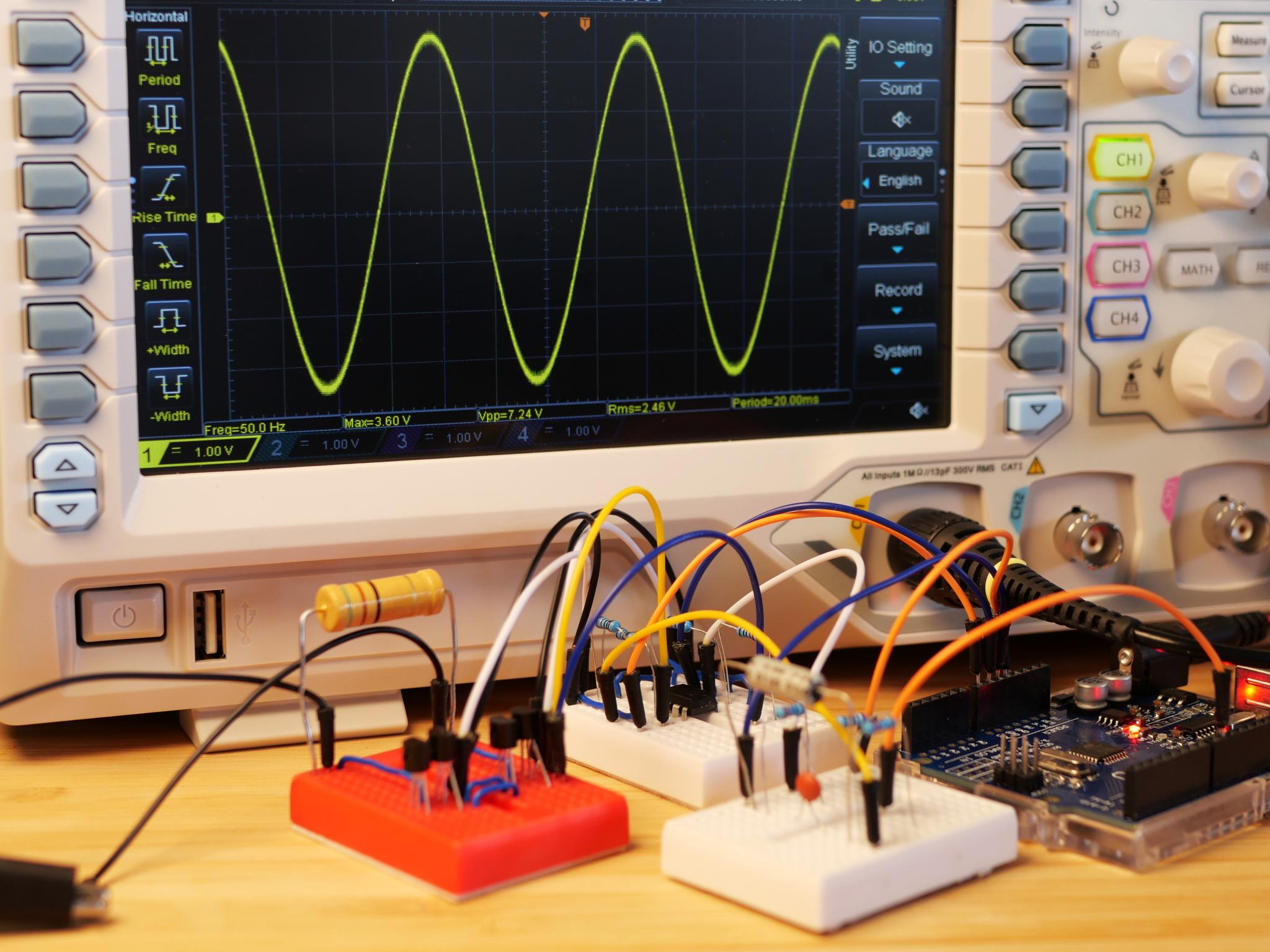 For the load this is quite simple. The RMS voltage of our generate sine wave is roughly 2.5 V. With this knowledge, we can simply use ohms law and calculate the current that flows through the load resistor and then calculate the power using the formula \(P = V_{RMS} \cdot I_{RMS}\). For 51 Ω the result is 120 mW.

Calculating the power dissipation for the transistors is more difficult. As an approximation, we can multiply the voltage drop over the transistor with the current that flows through the resistor. In this approximation we don't differentiate between base and collector current. As the base current is a lot smaller than the collector current, the approximation is still good, even if we assume that all the current flows through the collector. An additional fact, that we need to acknowledge is that each transistor is only on for half of the time. For the positive half-wave the current flows from the upper-left transistor through the load and the lower-right transistor to ground. In the negative half-wave the other two transistors are active. This means we need to divide our calculated values by two to get the average dissipation.

I won't go into the details and calculate the voltage drops and average power dissipation for each transistor, instead I made a small tool that calculates these values for the given load:

The tool shows, that the lowest possible load resistance is 14 Ω. With this resistance we achieve a current of around 175 mA and an output power of roughly 0.4 W. For lower resistance values the power dissipation in the upper-right transistor exceeds the maximum allowed value: the transistor overheats. The reason why the upper-right transistor overheats faster than the others is that its collector-emitter voltage is the highest. To achieve the output voltage of 5 V with a supply voltage of 12 V, 7 V need to drop over this transistor.

Compared with the output power of our previous circuit, which was capable to supply roughly 10 mA output current (~ 25 mW), this is a big improvement. However, it's also clear that our circuit is not the most efficient one. The efficiency of the amplifier circuit is only about 20 %. This approximation for the efficiency can be calculated quite easily: simply divide the total power dissipation by the dissipation of the load resistor. The result does not include the power needed for the microcontroller and the voltage divider, however. In the next part of this project, we will look at ways to further improve the circuit and increase its efficiency.