We already know how resistance, current and voltage behave for single resistors. But what about more complex resistor combinations?

In practice, most circuits contain more than one resistor. How do resistance, current and voltage behave in more complex circuits? Let's first have a look at the basic resistor combinations, that we can make with two resistors. At the end of this tutorial, we will take a look at a more complex example with more than two resistors. Of course there also circuits with more than just resistors, but that's out of scope for this tutorial.

Our first simple resistor combination consist of two resistors in series. The question is what will actually happen? What is their combined resistance and how do current and voltage behave?

Do you remember the experiment in which we first calculated and then measured the resistance of a pencil lead? My pencil lead was 17,5 cm long. What would happen if I use a saw and saw the pencil into two parts. Let's say one part with a length of 10 cm and one with a length of 7,5 cm. If we put both pieces together, in other words connect them in series, we would expect them to have the same combined resistance as the full length pencil lead. But, is this true? And what is the resistance of our two individual parts? 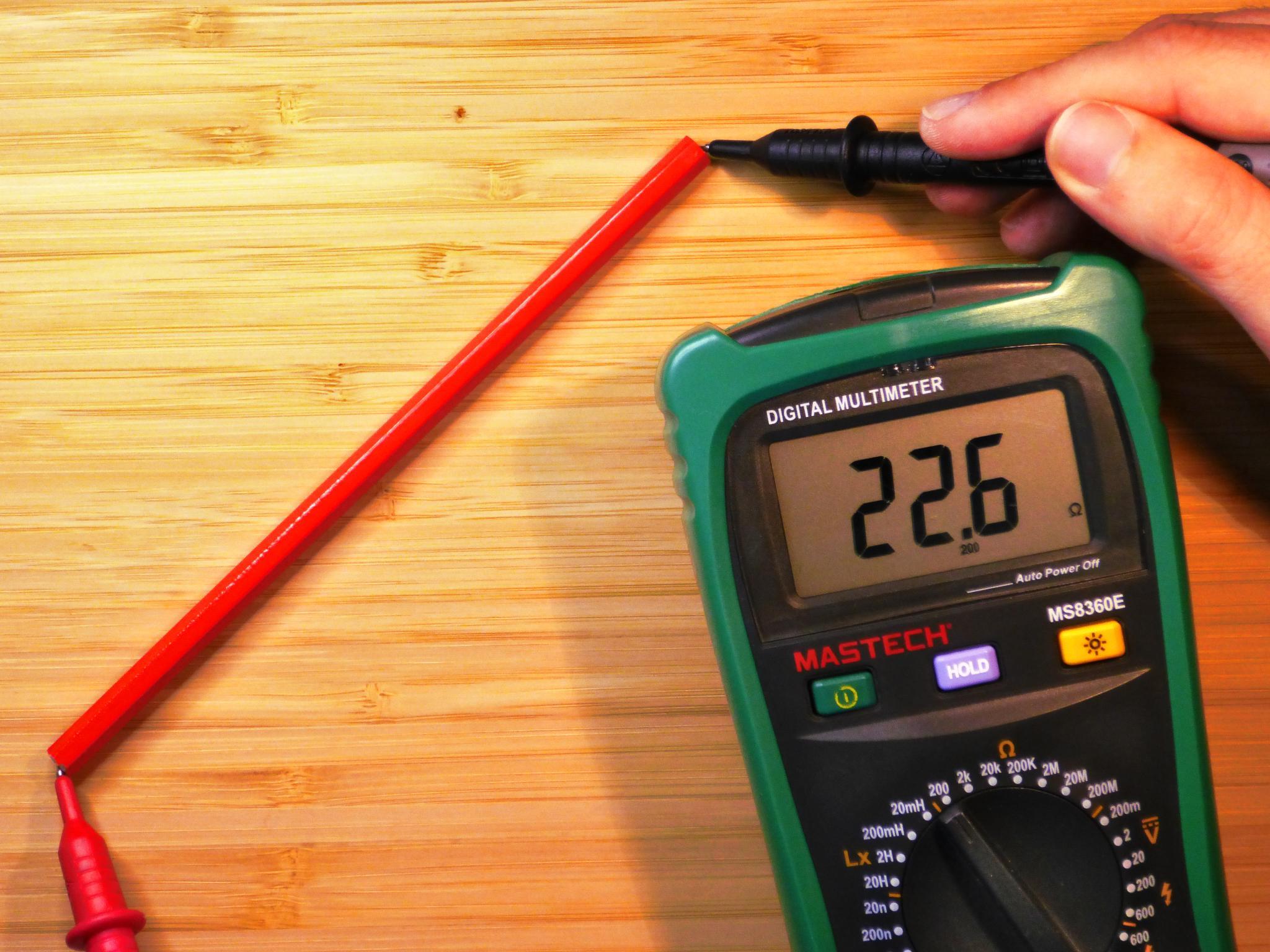 Let's look at an example:

As you can see, the total voltage is divided between both resistors. Both voltage drops will add up to our total voltage of 9V. One use case of resistors in series are voltage dividers, in which we make use of this fact. We will cover them in the next tutorial.

You might be familiar with the saying that electrons always take the path of the least resistance. This is not true, at least not if you want to apply it to our resistor combination in such a simple fashion. Electrons have no path finding algorithm. As electrons repel each other they will always spread over the whole conductive material. Of course, there is also the interaction with the atoms in the conductive material. Not all paths are equally conductive. Following ohm's law, less current flows through paths with a higher resistance and more through paths with less resistance. The result is however not the sole use of the path of with the least resistance, but the use of all paths at the same time. The electron flow splits up between the different paths.

What about current and voltage? We know that have the same voltage applied to both resistors. Calculate the current that flows through each resistor is really easy this time. We just use ohm's law:
\(I_1 = {U \over R_1}\)
\(I_2 = {U \over R_2}\)

We can also use ohm's law to calculate the current for the combined resistance. The calculated result is equal to the sum of individual currents flowing through the two resistors.

Let's look at an example:

For resistors in series there was the use case of a voltage divider, but what is the sense of two resistors in parallel? Why not a single resistor?

This resistor combination, however, can be used up to 2.5 W of power dissipation. This is good to know if you are in need of a high power resistor once. The calculation is, of course only that easy because all resistors share a common value. If this is not the case, you have to be more careful. The load will not be equally divided, in this case. The resistor with the smallest value has to be able to cope with the highest current and power dissipation.

Till now, we only looked at simple resistor combinations. What about more complex ones? For this I have prepared another example:

Are we right? Let's check it! The picture below shows the measured value. It matches our calculated value within the specified tolerance of 5 %. 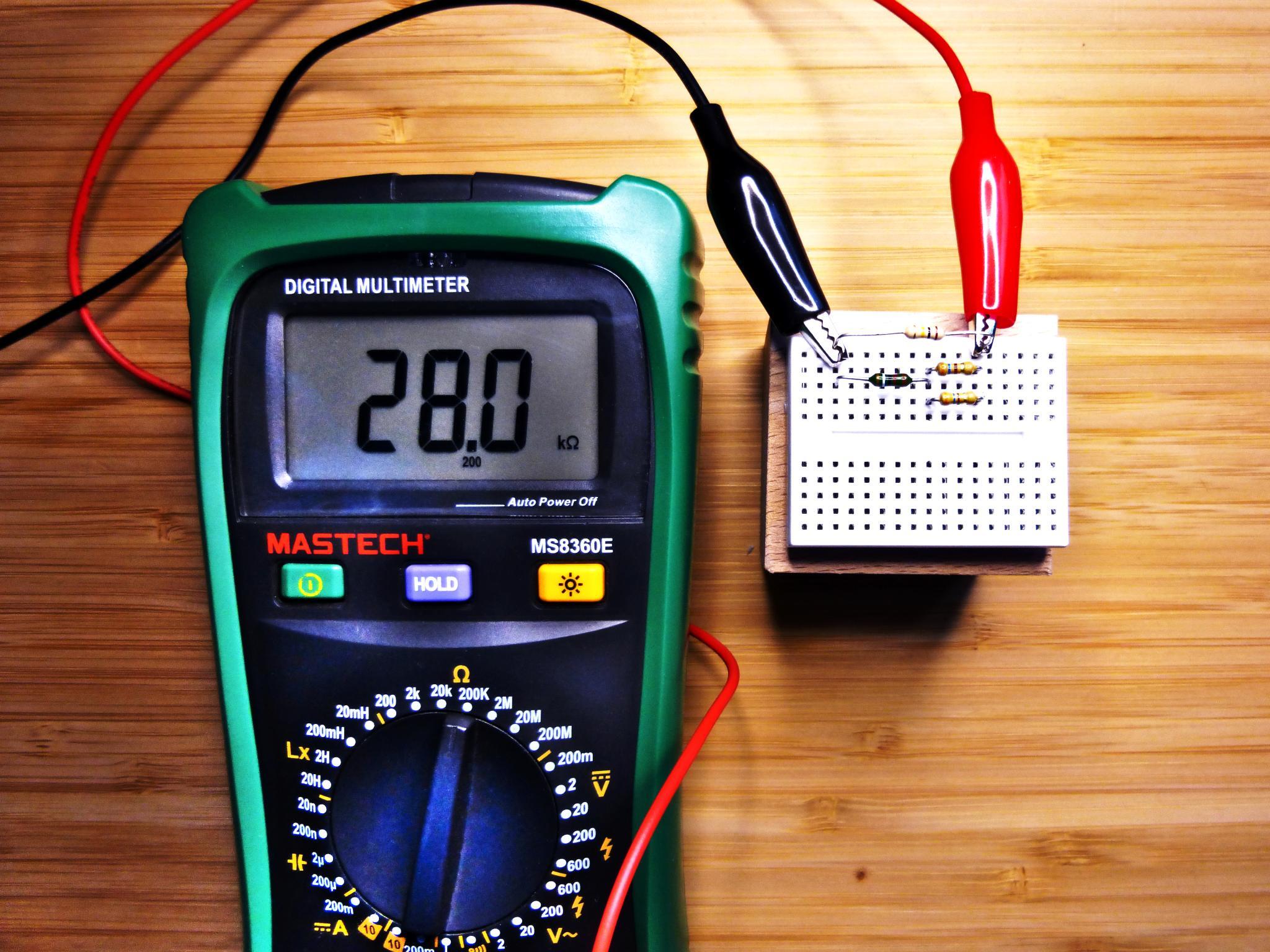 Like we did for our simple combinations, we can also calculate the voltages and currents for this more complex one. Once again we proceed step-by-step.

The picture below shows our final results:

You may have noticed, that not all values add up as they should. This due to rounding errors.