The right polarity matters. Almost all semiconductor components and electrolytic capacitors are sensitive for reverse voltages. Devices like the Arduino Uno can be easily destroyed by applying a reverse voltage. In this tutorial we will look at how to protect a circuit against reverse voltages by using diodes.

We will use an example circuit with an LED and a 9 V battery. LEDs are diodes as well and won't conduct current if they are reverse biased. However, LEDs are not designed to be used as rectifiers. A typical reverse breakdown voltage given in many datasheets is 5 V with an allowable reverse current of only a few microamperes. This essentially translates to: "Never apply a higher reverse voltage to our LEDs". If we connect the battery the wrong way around, the reverse voltage of 9 V could possibly destroy the LED. In practice a breakdown at 5 V is unlikely. The real breakdown voltage is usually around 30 V and above. The important point is, that there is no guarantee provided for this. If we exceed the 5 V, we are operating out of spec. The LED may degrade faster and depending on the age, the construction wise or temperature a breakdown may occur earlier. Anyway, the LED is just an example. If you replace it with a microcontroller you can be pretty sure that it will be fried when a reverse voltage of 9V is applied. Thus, let's look at some reverse polarity protection circuits.

The easiest way to provide a reverse polarity protection to a circuit is by connecting a diode in series. A reverse biased diode does not allow a current to flow through it and thus the attached circuit is unpowered if a reverse voltage is applied and won't be damaged. This simple solution is shown in the circuit diagram below.

This circuit is probably the most common reverse polarity protection circuit and used in many products. One example for this is the Arduino Uno's barrel jack connector. As shown in the picture below there is a diode right next to the connector to protect the Arduino from an accidentally applied reverse voltage. Note that this protection only applies to the barrel jack. If you directly apply the reverse voltage to the VIN pin, you can still destroy your Arduino Uno. 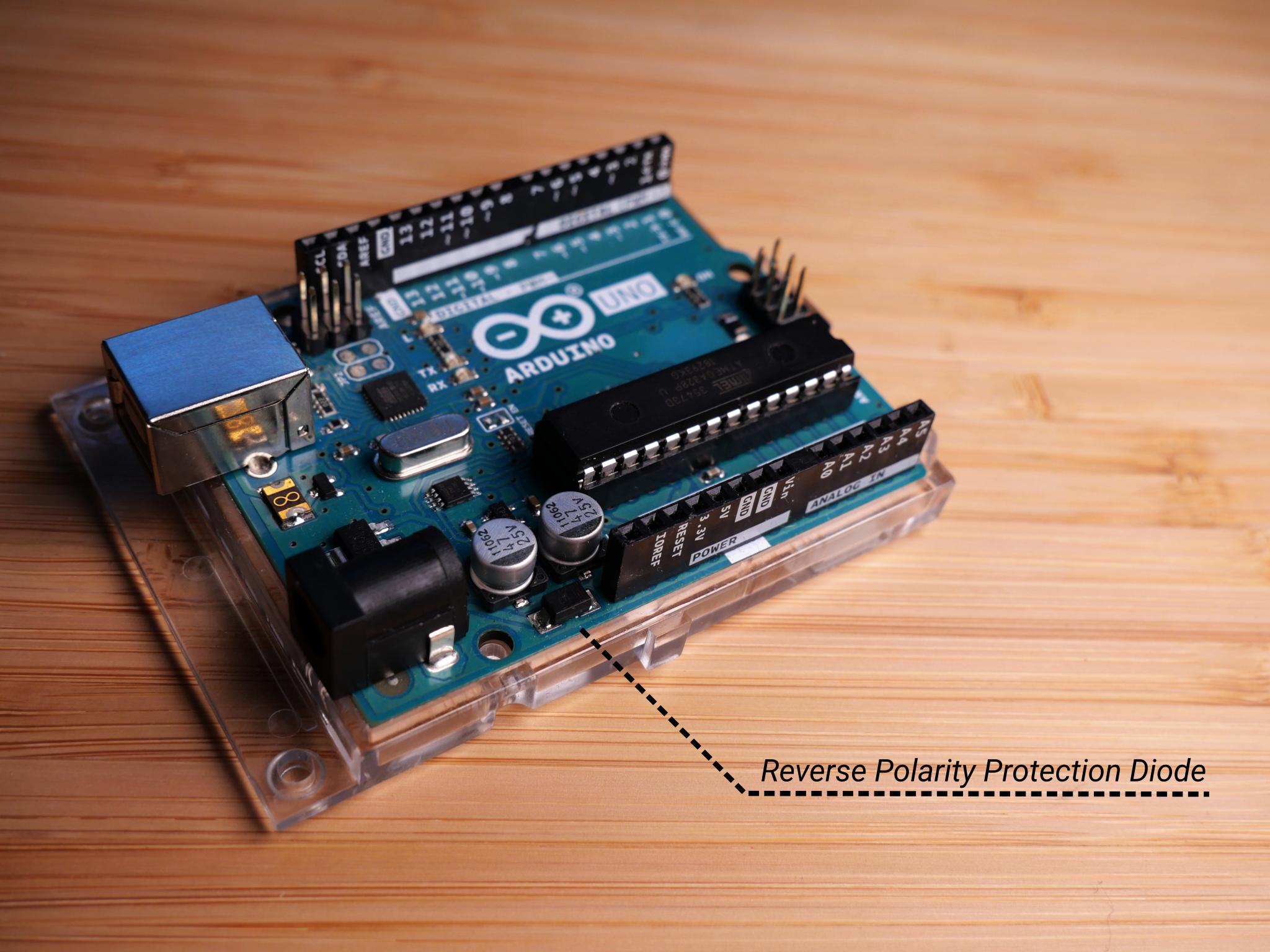 The use of a reverse polarity protection diode in series to a circuit impresses by its simplicity and the fact that no current flows if a reverse voltage is applied. There are some drawbacks regarding this solution, however. The voltage drop over the diode is around 0.7 V for a normal silicon diode. This is especially an issue with low supply voltage.

If you want to power 3.3 V microcontroller with a lithium polymer battery you would run into problems, if you add a protection diode. Typically, you need a voltage of around 3.5V, if you use good a low-dropout voltage regulator to create your 3.3 V supply voltage. A lithium polymer cell reaches a voltage of 4.2 V when fully charged. With a voltage drop of 0.7 V over the protection diode you are already at the minimum operating voltage of 3.5 V for your voltage regulator even for a fully charged battery. A schottky diode is an improvement to this, but the voltage drop is still problematic. In practice the solution is to just use a polarity-safe connector for the battery. This will effectively prevent reverse voltage without the need for any additional circuitry.

If the supply voltage is not an issue there is still one point to consider: the power dissipation of the diode. As the diode is connected in series all current has to flow through the diode. In consequence the diode has to be capable of handling the current consumed by the circuit. Additionally, the diode can cause additional power consumption.

For our simple LED circuit this is not an issue. Let's assume that the LED is driven with a constant current of 20 mA. We assume this for simplicity's sake, the current in the circuit shown above is around 13.4 mA. Let's further assume the constant forward voltage drop of 2.0 V over the LED and of 0.7 V over the diode. Without a diode the remaining 7 V need to be dropped over the resistor. If we look at the power dissipation around 40 mW are consumed by the LED and 140 mW are dissipated over the resistor. If we add a diode and want to keep the same LED brightness, we need to maintain the current of 20 mA. For this we need to adjust the resistor value. The total power consumption remains the same, we still have a total power dissipation of \(P_{tot} = 9 V \cdot 20 mA = 180 mW\). The 140 mW that were dissipated over the resistor are now split and 14 mW are dissipated by the diode and 126 mW by the resistor.

As you can see, the diode makes no difference in the power consumption. This is only because of the way the current limiting resistor works in this circuit, however. The resistor literally turns the remaining power into heat. This is different for other circuits. If we used a proper LED driver, the diode would cause an additional power consumption.

To sum up, an in series diode is a suboptimal solution for use cases where the supply voltage or the power consumption is critical. Luckily, this is not the case for a lot of common applications and thus an in-series diode is still one of the most common reverse polarity protection mechanism.

Let's look at a different solution that has no negative effect under normal operating conditions. A diode can be used as shunt. A shunt is an alternative low-ohmic current path. On this path, the current can pass around the protected circuit in case of reverse polarity.

For diodes and LEDs a typical example is the use of an anti-parallel diode. As you can see in the circuit diagram below, the diode is added in the reverse direction of the LED.

Under normal conditions the protection diode is reverse biased and the current flows completely through the LED. In case of a reverse voltage the diode becomes conductive and limits the reverse voltage over the LED to 0.7 V. The LED is protected. This method requires that the circuit is not damaged by reverse voltages below the forward voltage of the diode. This is not the case for all components. An example is the ATMega328P microcontroller used on the Arduino Uno which can only sustain a reverse voltage of 0.5 V. The use of a schottky diode should solve this problem in almost all cases, however.

The advantage of this solution is that the added diode has no effect in normal operation and still provides protection in a reverse polarity situation. The disadvantage is that there is still current flowing even if a reverse voltage is applied. The diode has to be capable to dissipate enough power. As the diode has a lower voltage drop than the LED, the current is higher in case of a reverse voltage than it would be under normal conditions. In our example circuit this is not a huge problem, as the resistor is limiting the current. But if a circuit needs a high current, we need a different solution.

Below you can see a schematic for a circuit that additionally uses a fuse. If a reverse voltage is applied the diode becomes conductive and a high current can flow through the diode. Over a long time this would destroy the diode, but if the fuse is correctly dimensioned it blows before this happens. The circuit is now disconnected from the power supply and no current flows anymore.

Another solution is a self-resettable PPTC fuse. The PPTC limits the current once it is heated up by the high current flow caused by the reverse polarity and the conducting protection diode. Once the voltage drops below 0.7V, the diode blocks the current flow and the PPTC cools down again. Eventually, an equilibrium is reached at a relatively low current. The current flow won't be blocked completely, however. I tried this with a 0.5 A PPTC fuse and the current is limit to around 45 mA. The diode can easily handle this, but there is still some power loss. It is important to notice, that a PPTC fuse needs longer than a normal fuse before it is heated up and the current flow is limited. In consequence, the diode needs to be able to sustain the initially high current for a longer time and should be correctly dimensioned for this.